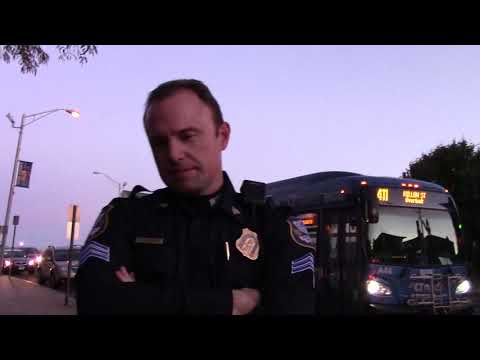 “You have the freedom to film and the right to record,” said Dan Barrett, legal director of the American Civil Liberties Union of Connecticut. “Our ability to observe government buildings and public employees is key to democracy, and vital when it comes to controlling police.”

On an October evening in 2018, Massimino stood on the sidewalk on East Main Street and recorded video footage of the exterior of the police station, capturing with his camera what anyone walking by could see themselves. Although Massimino was peacefully standing on a public sidewalk, Benoit and Laone confronted Massimino, telling him recording the outside of the building was “a security issue,” and that they thought he was committing the criminal offense of “reasonable suspicion.”

“There’s no such thing,” said Barrett. “But they eventually came up with an offense that’s actually in the statute books--interference--and put Keith through a three-year nightmare.” Massimino had to defend himself against the criminal charge, only getting a reprieve when prosecutors finally dismissed the charge outright in the spring of this year.

“It was terrible for me and my family to be facing a year in prison for recording the outside of a public building,” said Massimino. “As a professional videographer for over 12 years, and someone who cares a great deal about the freedom of speech and the right to know what the government is up to, I’m still stunned by what these people did to me.”

In public spaces where you are lawfully present, you have the right to capture any image that is in plain view. That includes taking pictures and videos of government buildings, transportation facilities (including airports), and police officers. “Anything you can see with your eyes in public is fair game,” noted Barrett. “Connecticut police want to prevent the public from seeing what they’re up to, but we’re not going to let them hide in plain sight.”

In the lawsuit, Massimino seeks redress for the violation of his First and Fourth Amendment rights.