Divestment from policing is close to reality for a lot of people in our state. It should be reality for everyone.

Right now, Connecticut towns are, after years of work from Black organizers, beginning to consider divesting from policing – diverting money that currently goes to policing to instead go to things that make places healthy and safe, especially in Black and Latinx communities that have been most harmed by policing. While the concept may be new to some, it has been around for decades thanks to the efforts of Black and Latinx leaders.

Divestment is also something many Connecticut towns already functionally abide by, although they might not call it that – more than half a million Connecticut residents live in towns without municipal police. The conversation that’s happening around police divestment is therefore, at least in part, a conversation about equity. It’s about bigger towns and cities, especially those where policing most harms Black and Latinx people, getting the same chance to do what many smaller and whiter Connecticut towns have long done: investing their hard-earned resources into schools, healthcare, food security, housing security, and jobs instead of policing.

To Josie Duffy Rice’s point, it’s true in Connecticut, as across the country, that white, affluent suburbanites have vastly different experiences with police, including with their own local police departments, than their Black or brown affluent neighbors and people in “Black brown and poor” communities. But more literally, it’s also true in Connecticut, as is the case across the country, that there are plenty of towns without municipal police, “with that absence.”

33 years ago, the borough of Danielson, Connecticut voted to disband its police department. By July 19, 1987, an article appeared in the New York Times with the headline, “No Police, No Expense in Danielson.”

Pamela Duval, a Danielson borough councilor at the time, told the Times that the policing had been one of the community’s most expensive budget items. Danielson was rethinking its government structure, and its police department cost “$430,000 a year, or more than $100 per capita in the one-square mile borough of 4,000 people” (in today’s dollars, this would equate to about $970,505 per year). Instead of paying to maintain its own municipal police, the borough decided eliminate its department and to instead rely on the local state police.

''There has been less crime and fewer problems here since our police department was disbanded than when we had a full complement of officers,'' Duval said.

Fast forward to today, and Danielson (and the surrounding town of Killingly) has stuck by its decision not to have municipal police. It’s not alone. Of Connecticut’s 169 towns and cities, 79 do not have municipal police departments. Of those 79 towns, 53 have resident state troopers (state police who live in and are assigned to the town, which pays a percentage of the costs of those police) and 26 rely solely on state police and do not pay for those services. In other words, 79 Connecticut towns have already divested from municipal policing, and 26 of those towns have almost divested from policing altogether.

While these towns are predominantly white, not all of them are small. At least, not all are smaller than those with municipal police, which suggests that the decision to divest from policing isn’t necessarily about population size.

Compare, for example, Southbury and Monroe. Southbury is slightly larger, at 19,656 people compared to Monroe’s 19,470, according to Connecticut Department of Public Health estimates. The towns are only about 14 miles away from each other, are both more than 95 percent white, and are both around 12 miles from the closest large city (Southbury is slightly more rural). Southbury is one of the largest population towns that relies on a resident state trooper program, with a state police employee overseeing around 19 patrol employees. Monroe, meanwhile, maintains its own municipal police department, with 29 police employees in its patrol division alone.

Under its current budget, Southbury has allocated $2,428,272 for policing – approximately 3 percent of the town’s overall budget. Meanwhile, Monroe has allocated nearly twice that much just for personnel costs. At $4,797,071 for personnel and $486,596 for operations, Monroe has budgeted around $5,283,667 for policing this year – approximately 5.8 percent of the town’s total budget.

While this is just one comparison, the fact that two similarly sized towns in Connecticut could have such wildly different policing budgets helps to show that big policing budgets are choices by policymakers, not automatic imperatives (Southbury also has a lower crime rate, putting it in company with national studies showing that more police doesn’t reduce crime).

To be clear, every town, including those that rely solely on state police, must do more to diminish the role, responsibilities, and presence of policing. No town is a model, and we certainly aren’t arguing for places to jump into the arms of the state police, an agency that is unaccountable, armed to the teeth, and rooted in racism, the same as other forms of policing. This year alone, state police killed 19-year-old Soulemane Mubarak and were caught on video threatening a motorist.

The point is, it’s possible to imagine a world in which municipalities’ budgets and behaviors aren’t defined by policing, because that world is already almost reality for many people in our state. At least, it’s closer to reality for some people than others.

This speaks to a broader truth that has long been obvious to Black and Latinx people: the map of where policing is heaviest in Connecticut is largely a map of racial segregation. 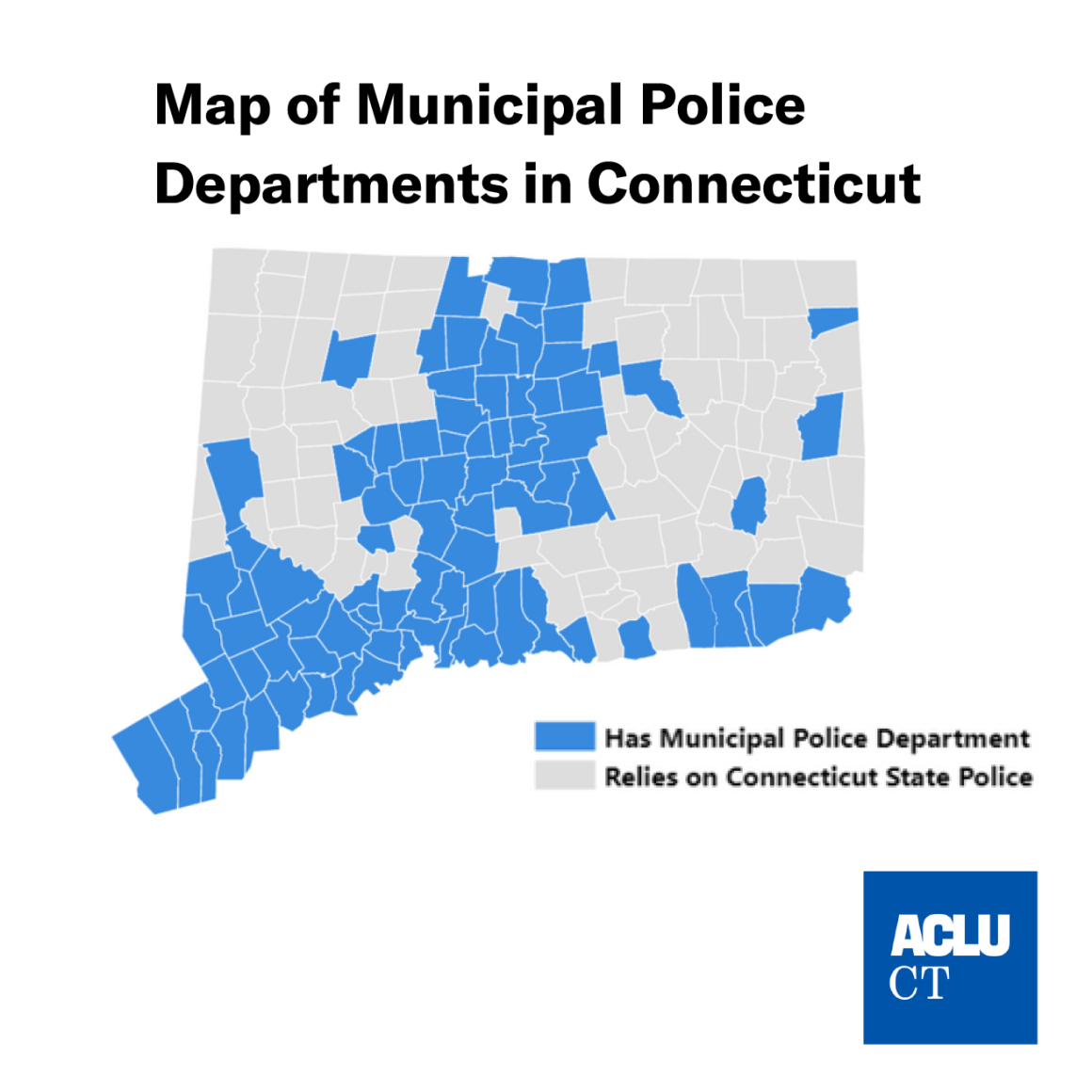 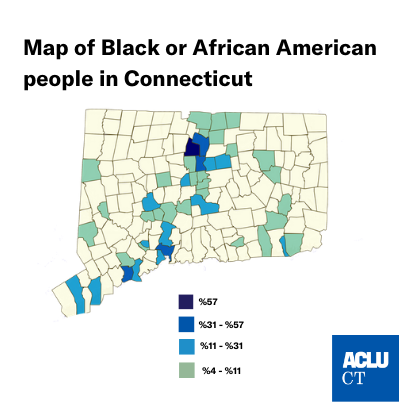 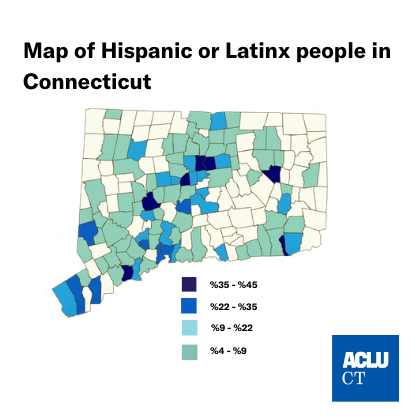 The map of policing in Connecticut, generally speaking, reflects the following:

The map of policing in Connecticut, in other words, is very much a stark illustration of the racist inequities at the root of policing. It shows that divestment from policing is possible, but this divestment hasn’t happened in towns where more residents are Black and Latinx.

It’s time for Connecticut to create a new map – one where all towns and cities, not just those that are more white, are divesting from policing across the board and putting those resources instead into things that make communities healthy.

[Municipal vs state police-reliance data above is based on the most recent available data: a 2016 Office of Legislative Research study combined with news reports of East Lyme, which replaced its resident trooper program with a municipal police department in 2017.]

Policymakers need to listen to activists on the solutions to police...

Three things that must happen when a prison closes

Reaction to Senate Republican Caucus Proposal to Roll Back Criminal...

15 Questions for the People Trying to Become CT’s First Inspector...

Connecticut’s first Inspector General must be ready to hold police...

ACLU of Connecticut Sues Waterbury Police Employees over the Arrest...

We Must Value Kids Over Cars: Address Youth Crime with Better...

ACLU-CT & CTJA: The Solution to Youth Offenders is Not More Time