The ACLU of Connecticut has joined others seeking abolition of the death penalty to redouble their efforts in the wake of a gubernatorial veto of an abolition bill. “The ACLU along with our allies will vigorously pursue such a campaign to insure that Abolition Day will happen one day soon,” Executive Director Andrew Schneider told a State Capitol news conference.

A bill to abolish capital punishment was adopted this year by 90 of 151 members of the Connecticut House, and by 19 of 36 members of the Senate — both tallies well short of the two-thirds majority needed to override a veto.

In vetoing the bill, Gov. M. Jodi Rell, long a supporter of capital punishment, defended its use for those who commit the most heinous crimes. “The death penalty,” she said in a two-page veto message, “sends a clear message to those who may contemplate such cold, calculated crimes … We should not, will not, abide those who have killed for the sake of killing; to those who have taken a precious life and shattered the lives of many more.”

“We are deeply disappointed that the Governor has decided to veto this bill,” Schneider said at a conference that included the NAACP, the Connecticut Network to Abolish the Death Penalty, and House Speaker Christopher Donovan, who championed the abolition bill.

The ACLU played a key role in coordinating efforts to get the bill adopted — and will continue in that role, Schneider pledged. “We view this as a momentary setback in our campaign,” he said. “A recent Quinnipiac poll revealed that the public is misinformed about capital punishment. A whole quarter of respondents believed incorrectly that the death penalty is a deterrent and another 25 percent wrongly believed it cost less than life in prison without release. An education campaign is exactly what is needed to prevail on this issue.

“The death penalty is the ultimate denial of civil liberties,” Schneider continued. “In the past 35 years, nationally, over 130 inmates were found to be innocent and released from death row. Capital punishment is a clear violation of the Eighth Amendment’s ban on cruel and unusual punishment. Its use is routinely based on such factors as race, class, venue, and the quality of counsel. A recent Yale University study found that black defendants in Connecticut receive death sentences at three times the rate of white defendants in cases where the victims were white. “Our message is simple,” Schneider concluded: “unequal justice is no justice at all.”

Benjamin Todd Jealous, national president of the NAACP, had come to Connecticut hoping to meet with Rell to dissuade her from the veto. He spoke with her by telephone instead. Jealous called the veto “a cowardly act on a serious issue” that will cause Connecticut to continue “spending millions o

f dollars killing the killers you've already caught.” A spokesman for Amnesty International said, “Gov. Rell’s veto of this legislation represents a missed opportunity for the state of Connecticut to extricate itself from the useless and costly boondoggle that is capital punishment. Any other policy that wasted valuable taxpayer dollars without reducing crime or making anyone safer would have been eliminated without hesitation.” 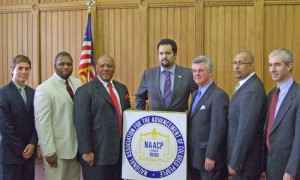