This year has been an unprecedented test of America's democracy, but civil liberties supporters have given us hope for the future of freedom, justice, and equality in Connecticut. Read and download the ACLU of Connecticut's year in review for a look back at 2017--and a look at what's ahead.

Persistence is our secret.

A note from ACLU of Connecticut executive director David McGuire: 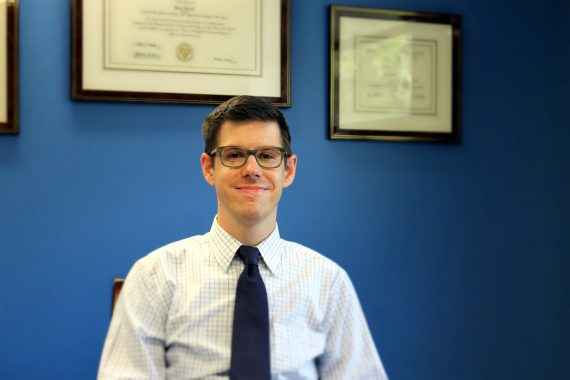 On November 12, 2016, four days after the U.S. Presidential election, I stepped into a new role as executive director of the ACLU of Connecticut. This year has been an unprecedented test of our democracy, ulike any I've seen in my previous ten years as the ACLU-CT's staff attorney, legal director, and legislative director. Dramatic changes nationally and in Connecticut's legislature have increased the urgent need for stronger state-level civil liberties protections.

Yet I have faith, because my experience with the ACLU-CT has shown me that defending people's rights against long odds is what we do best. For decades, the ACLU-CT and our allies fought in the courts and legislature to abolish the death penalty. In 2012, we finally passed a law to end it, yet a loophole left 11 people on death row. So, we shifted to the courts, where we argued that it would be unfair to execute people when the state had decided the punishment was unjust. Ultimately, three years after the law passed, the state Supreme Court agreed with our stance. Persistence, in that case and so many others, was our secret weapon.

Everyone who cares about civil liberties must draw on that same resilience now. I feel a great responsibility to thoughtfully grow our organization during this critical period, so that our litigation, advocacy, and legislative departments are all in the best positions to overcome threats to freedom while still seizing every opportunity to make positive change. This report outlines the ways we will protect and expand everyone's rights moving forward.

You, our steadfast supporters who stand up for freedom, equality, and justice, make us an effective bulwark for liberty. As an ACLU founder said, "so long as we have enough people in this country willing to fight for their rights, we'll be called a democracy."

Thank you for defending democracy with us.

Looking back and ahead

A note from ACLU of Connecticut board president Andy Schatz: 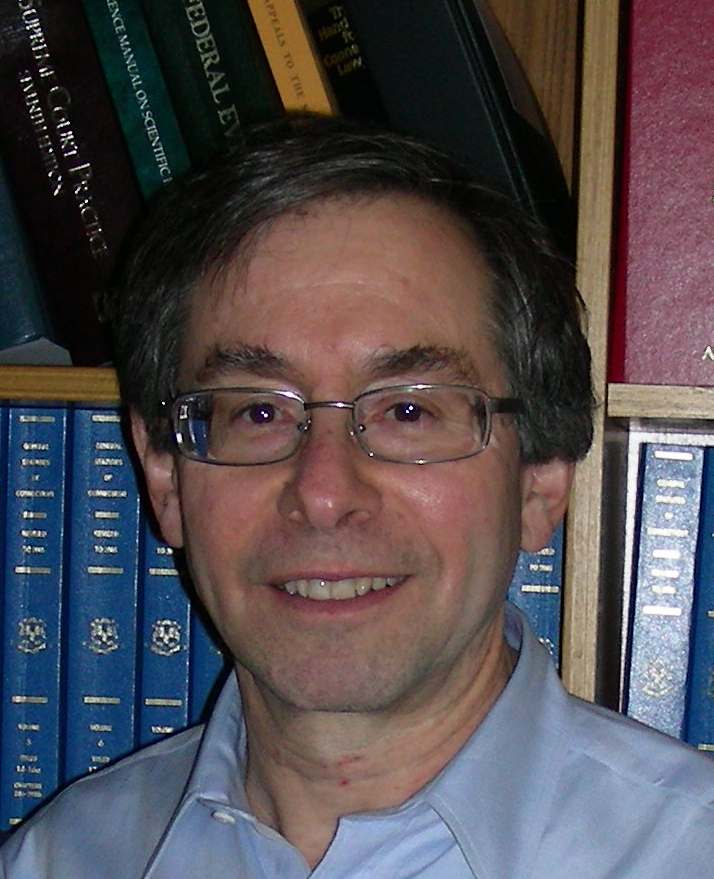 Finishing my eighth and final year as your ACLU-CT board president, America faces unprecedented attacks on liberty, but I remain optimistic.

During the past decade, the ACLU-CT has supplemented our 69-year tradition of effective litigation by increasing our legislative advocacy, community engagement, and communications capacities. As a result, we have helped to shape nearly 40 major (often bipartisan) state laws, including groundbreaking laws on transgender people's rights, cellphone privacy, and police use of Tasers. While mindful of ACLU co-founder Roger Baldwin's warning, "civil liberties battles never stay won," we're positioned not only to take on current threats to liberty, but to achieve lasting reform.

Success is a team effort. Our tireless, expert staff deserve full credit for the results, as this report highlights. Our board set the strategic plan and appropriate funding, and one year ago promoted David McGuire, a young but veteran ACLU-CT staff member, to lead our efforts as executive director. Pro bono cooperating attorneys and volunteer activists expand our reach. Most importantly, you, our members and donors, enable us to defend freedom. Thank you.

Liberty not only requires vigilance, but hard work, and there is much to do, both nationally and in Connecticut. Our colleagues with the national ACLU continue to battle threats in courts nationwide. Our ongoing work to create police accountability can counteract disturbing state and national trends. And we must protect free speech from attack and erosion. Effective communication and advocacy will be critical in the years ahead.

Together, we can protect liberty for the long term. 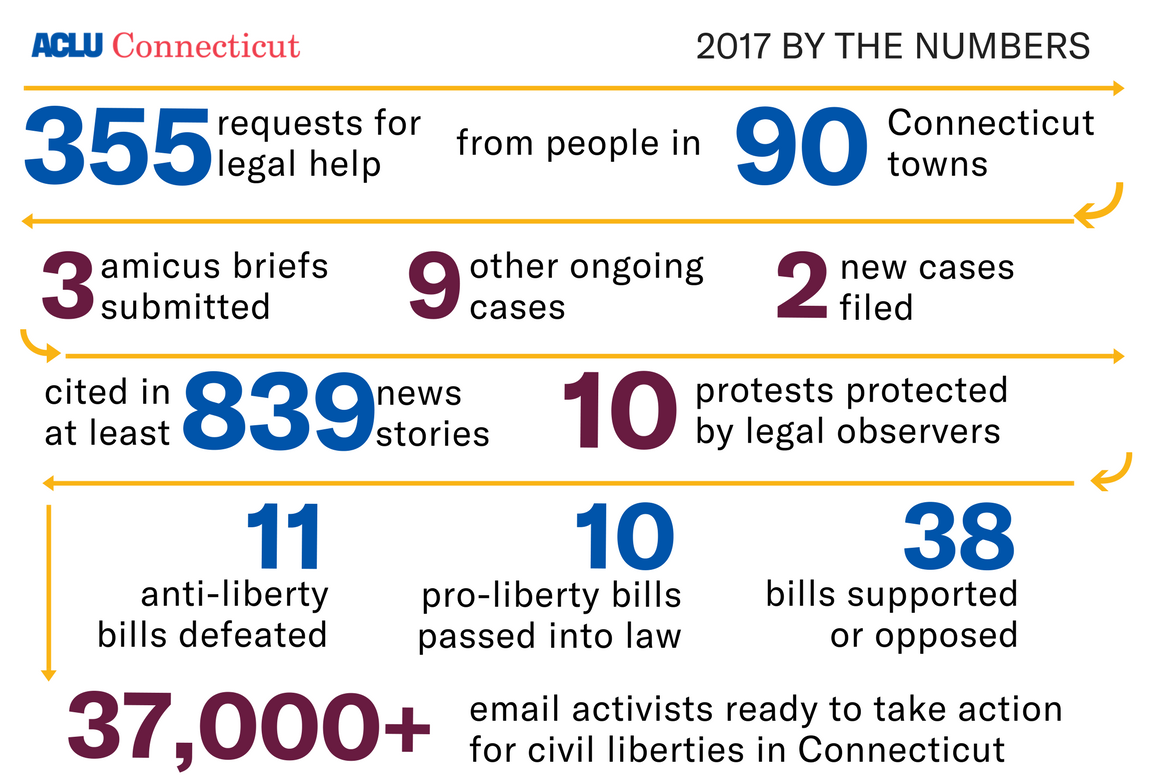 WE THE PEOPLE DARE TO CREATE CRIMINAL JUSTICE REFORM 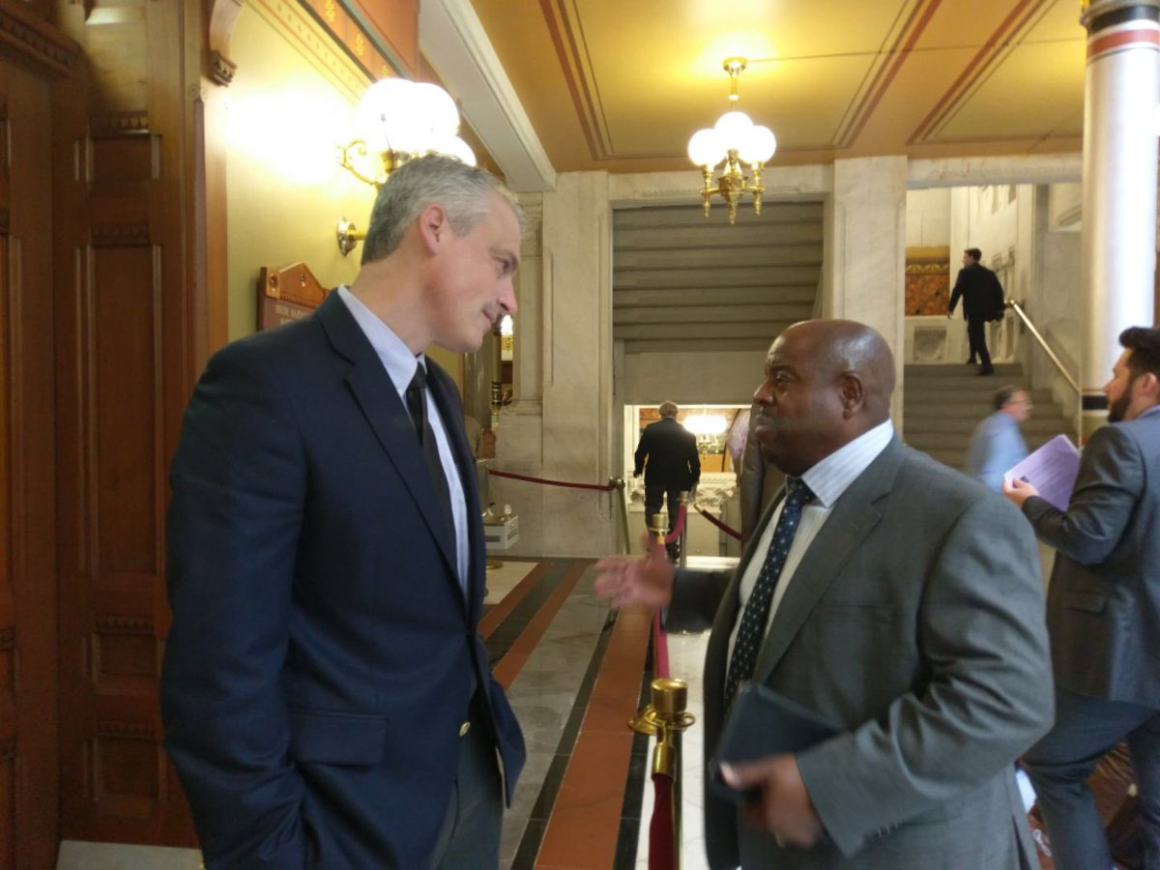 From police practices to prison policies, the justice system should treat every person fairly. With many voices, including the ACLU-CT, calling for change, Connecticut has led the nation in striving for a constitutional and fair justice system, but our work is far from done--particularly when it comes to making sure that justice doesn't depend on the color of someone's skin. Connecticut is second worst in the country when it comes to imprisoning Black men in solitary confinement, and our state detains Black youth ten times more than white youth. With focus and commitment, we can eliminate racial disparities in the justice system, protect the rights of people who are accused of crimes or imprisoned, and end the injustice of mass incarceration.

WE THE PEOPLE DARE TO BUILD POLICE ACCOUNTABILITY 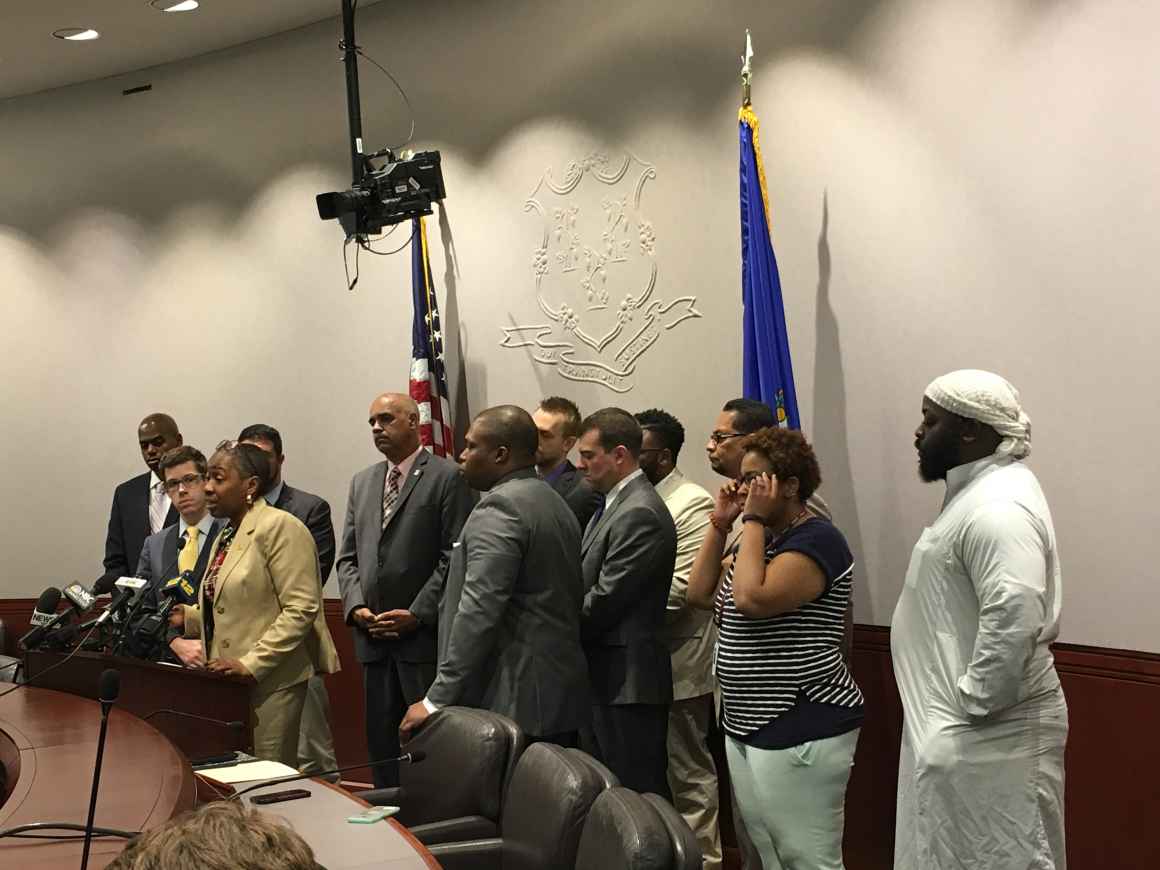 Above: Members of the legislature's Black and Puerto Rican Caucus meet after 15-year-old Jayson Negron was shot and killed by Bridgeport police.

America's democracy was founded on a promise of equal treatment under the law. No matter the color of your skin, your zip code, or how much money you have, police should treat you fairly and respect the Constitution. Each step of the way, however, police have created loopholes to the checks and balances we expect in our democracy. Biased policing jeopardizes faith in fair treatment under the law. Police departments acquire weapons meant for battlefields without even notifying the people whom they are supposed to serve. And police have rigged the justice system so they can hurt and kill people, especially people of color, while only answering to themselves. We will create a more democratic Connecticut where people can have faith that police answer to the Constitution, not their own self-imposed and self-enforced rules.

"No matter who we are, we all have rights." - Woodrow Vereen

WE THE PEOPLE DARE TO DEFEND FREE SPEECH 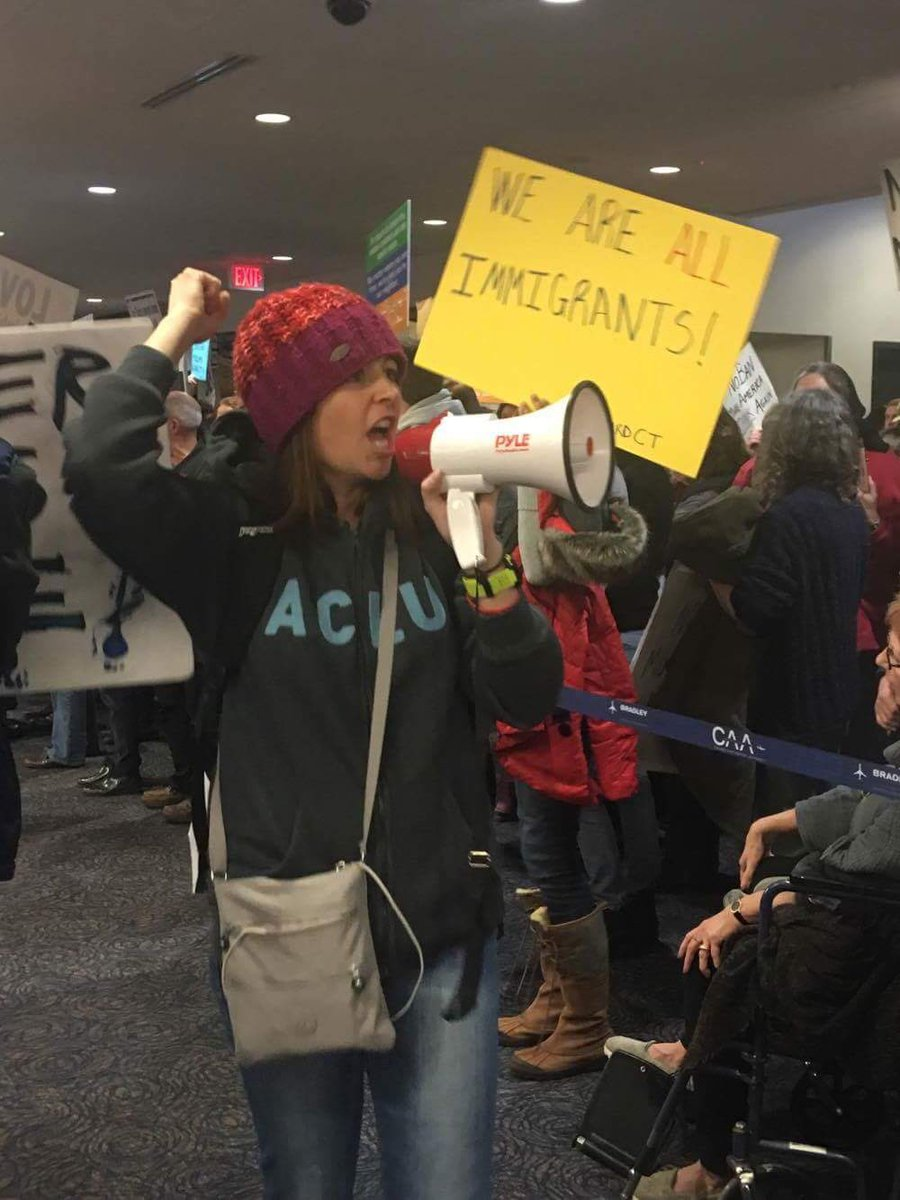 Free speech belongs to everyone, but America has often failed to protect the rights of people who have not typically held the reins of political power. Now, the free speech rights of people of color, women, LGBTQ people, religious minorities, and immigrants are under threat: the federal government harasses and spies on racial justice advocates, the president called for a reporter who criticized him to be fired, and Bridgeport police used recording equipment to intimidate protesters at a vigil for a boy who was killed by city police. The ACLU-CT is here to safeguard the right to peaceful protest, and to ensure the government doesn't rig the system to allow only the voices it agrees with to be heard. 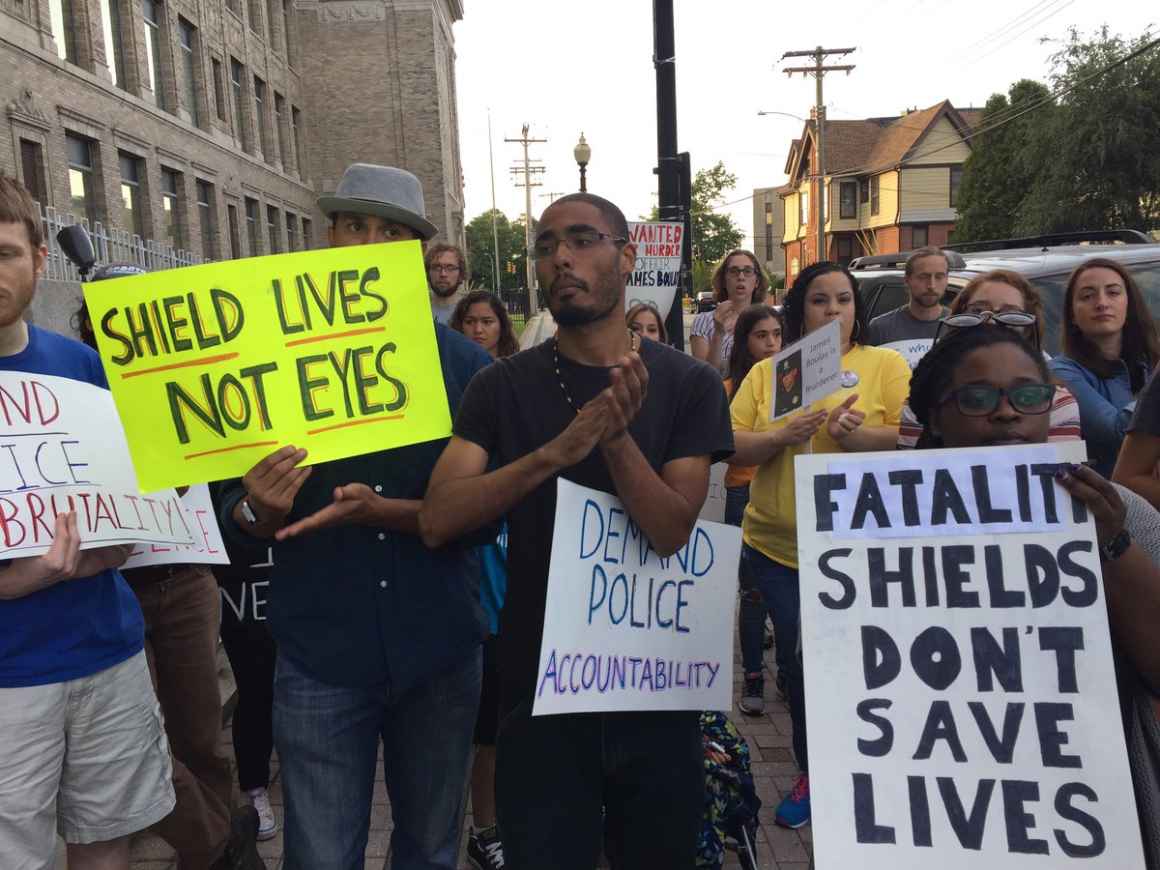 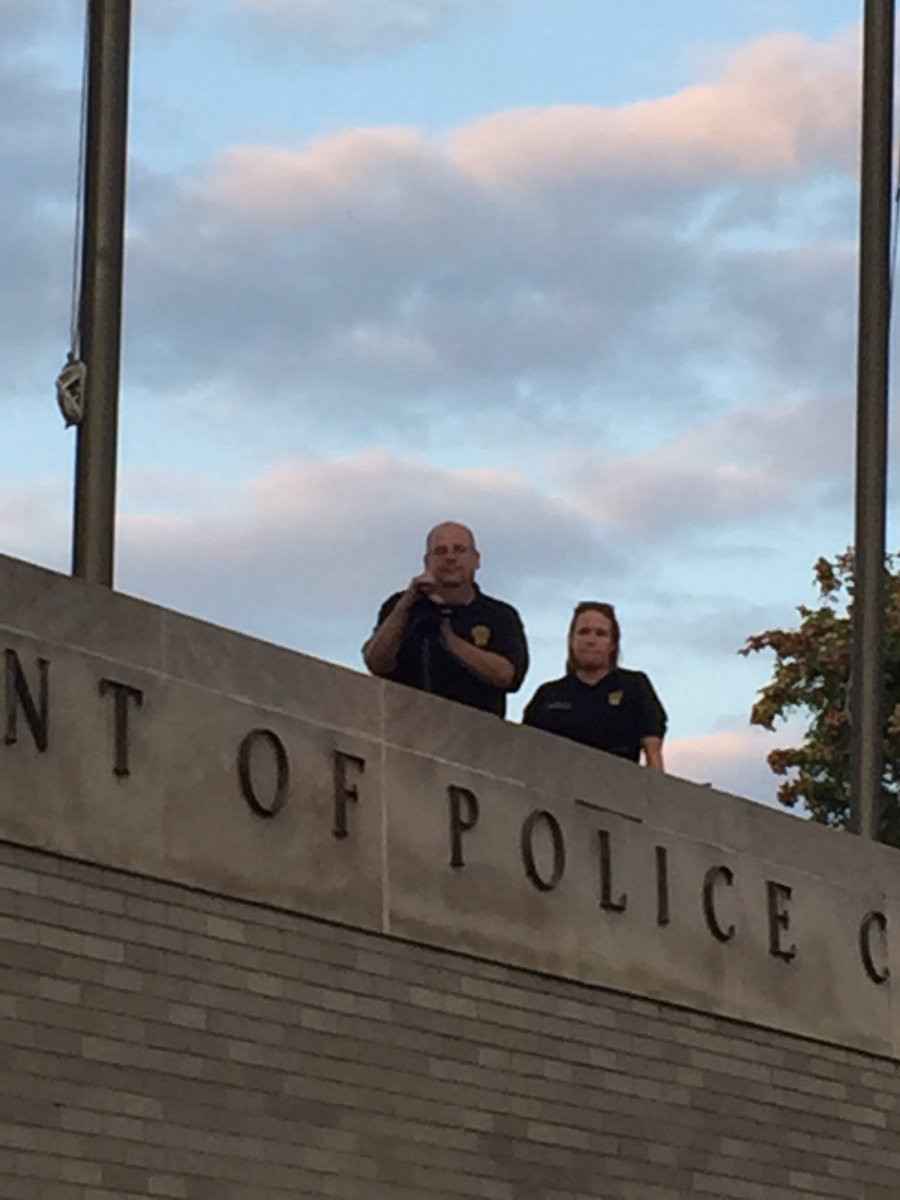 Above: Bridgeport police officers record peaceful protesters during a vigil in memory of Jayson Negron, a 15-year-old boy who was shot and killed by police.

Privacy is about keeping your information safe, and it's about protecting your loved ones from government intrusion. When the government searches your texts, spies on your home, or collects your DNA without a warrant or your permission, it is invading your privacy and the privacy of the people you know. Americans should not have to choose between connecting with their loved ones and protecting their rights, and the government shouldn't get a pass to invade your privacy just because the laws haven't kept up with today's technology. The ACLU-CT will create a world in which your information is your own and the Fourth Amendment ban on unjust searches extends to the modern era.

WE THE PEOPLE DARE TO ENVISION REPRODUCTIVE FREEDOM 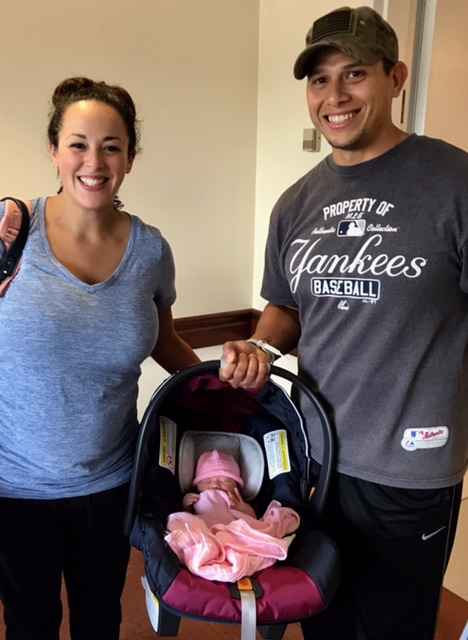 Reproductive freedom is essential for women to be able to determine the courses of their own lives and to equally participate in society. We envision a world in which every woman--from every zip code and income, and no matter where she works or goes to school--is able to make her own decisions about whether and when to become a parent, without facing obstacles from the government or discrimination from her boss. While Connecticut has come a long way since the ACLU-CT's landmark cases of Griswold v Connecticut and Doe v Maher, we are still striving to make reproductive freedom a reality.

WE THE PEOPLE DARE TO SUPPORT LGBTQ RIGHTS 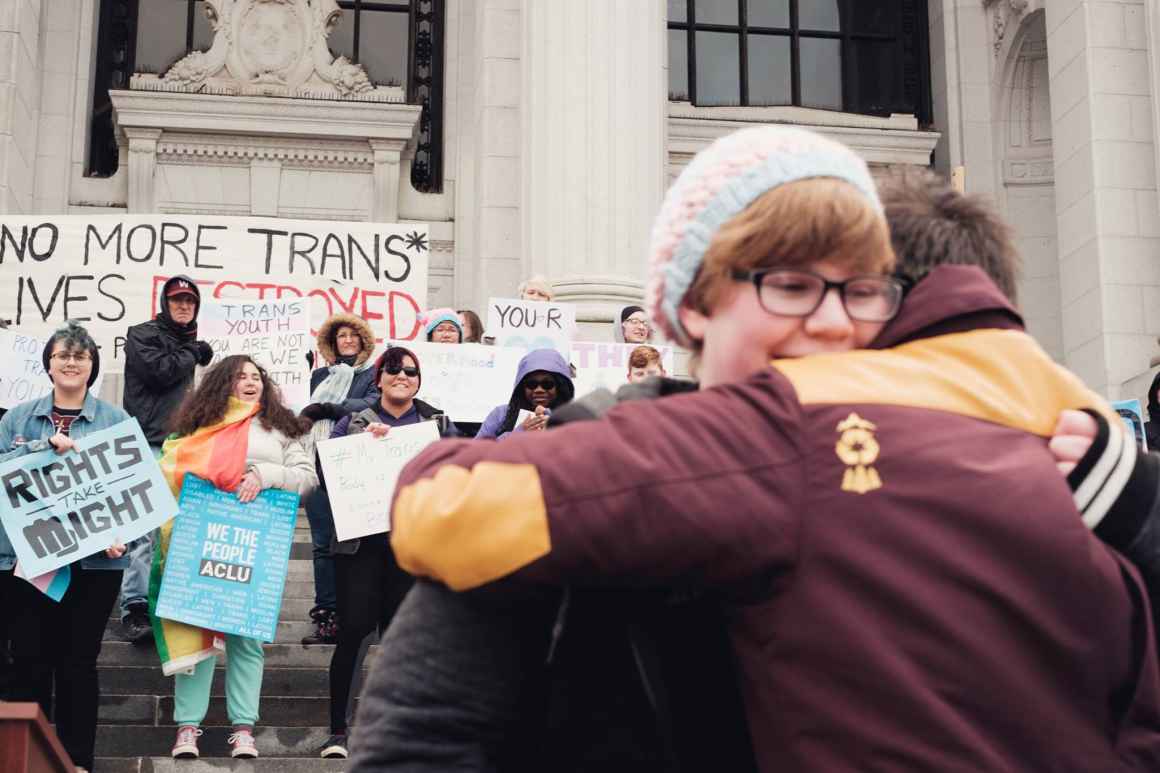 Above: Activists hug during a rally at the Connecticut Supreme Court to support transgender youth.

Every person has the right to personal autonomy, freedom of expression and association, and equal treatment under the law. Those rights shouldn't depend on who someone loves or how they express their gender identity. We envision a world in which every LGBTQ person can live openly without discrimination and enjoy the rights guaranteed by the Constitution. While Connecticut has come a long way since the ACLU-CT's landmark case to make our state legalize marriage equality, we still have work to do.

WE THE PEOPLE DARE TO THINK FORWARD.

We don't just defend civil liberties; we envision a more free, equal, and just world, and we work to make that vision a reality. 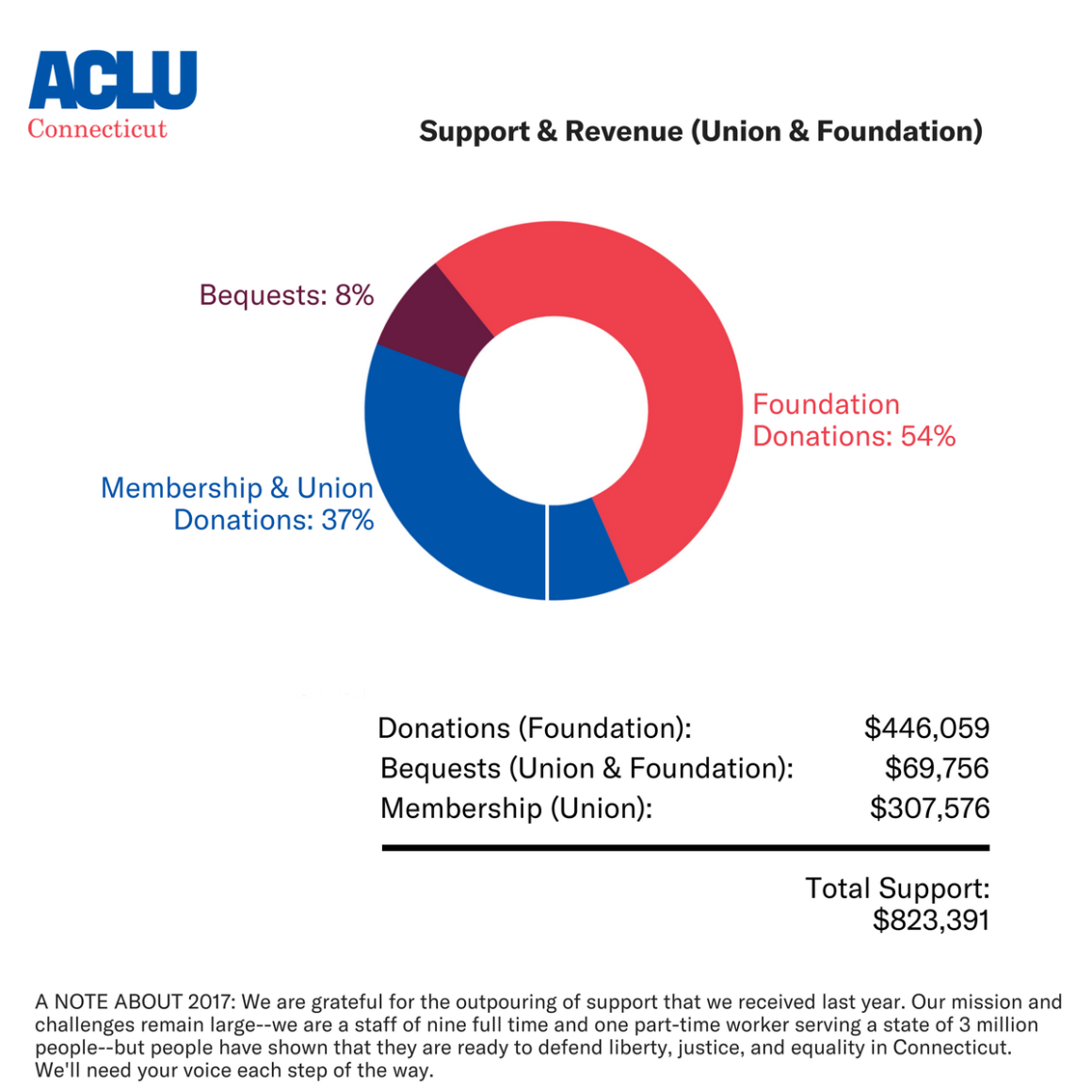 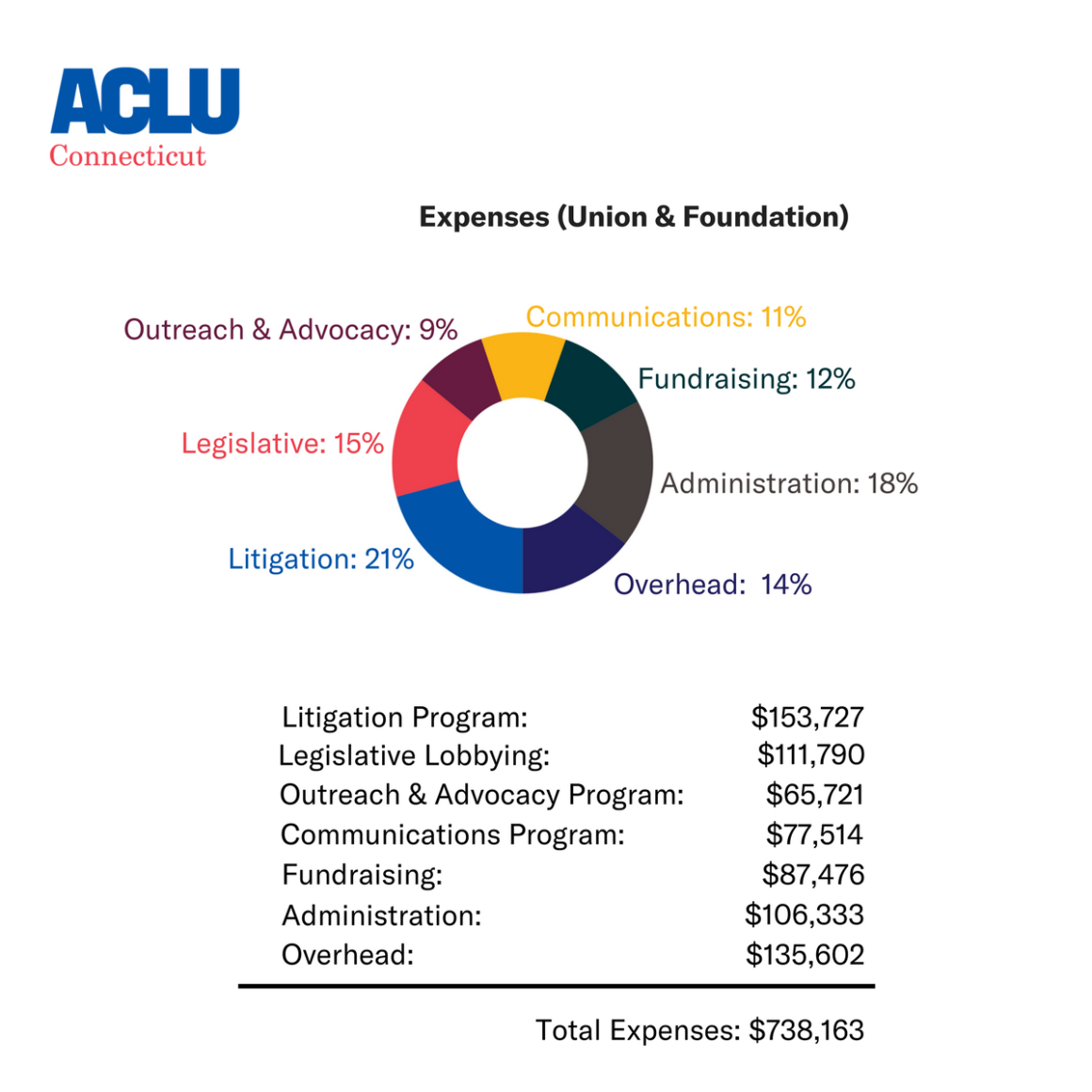 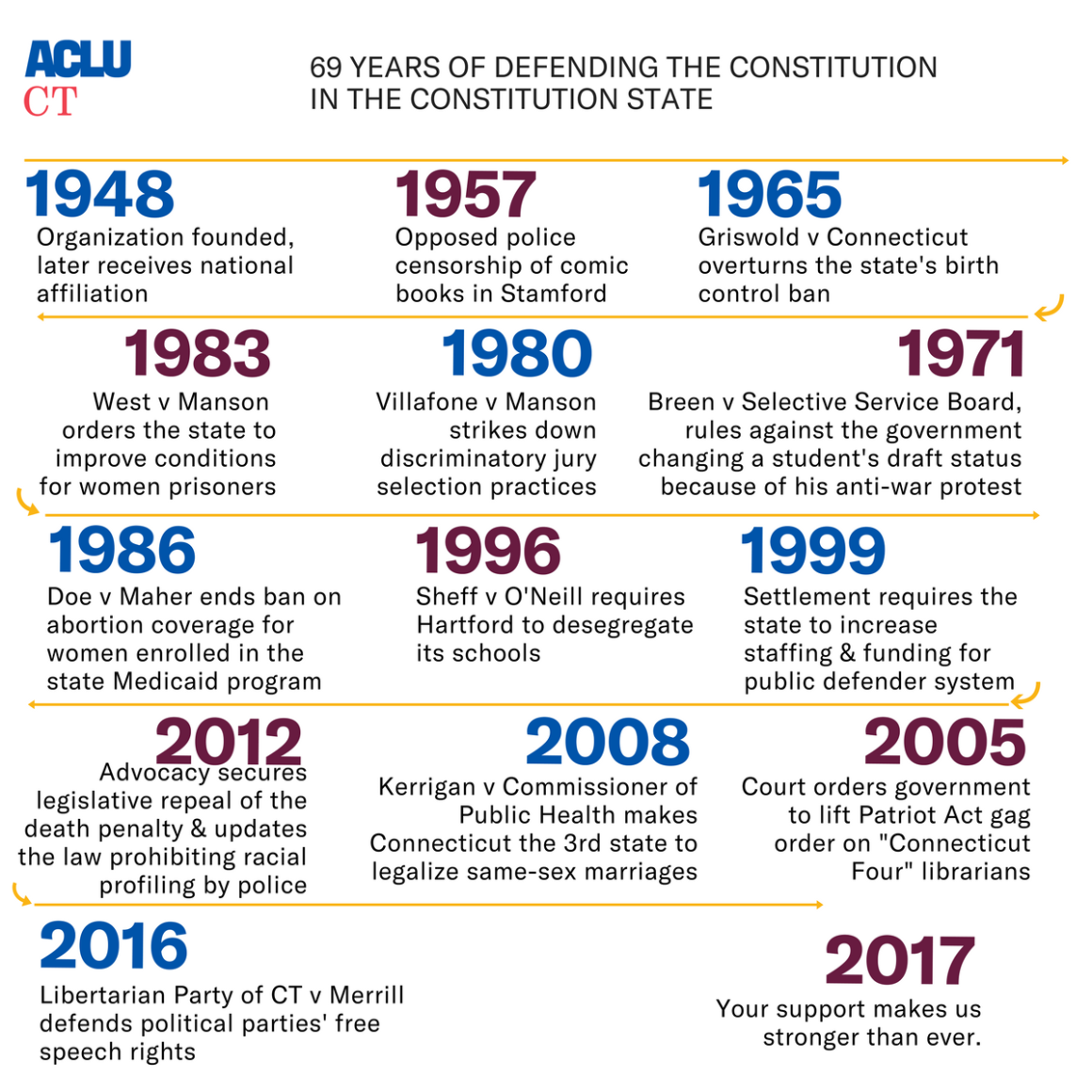 THANK YOU FOR STANDING WITH CIVIL LIBERTIES IN 2017. 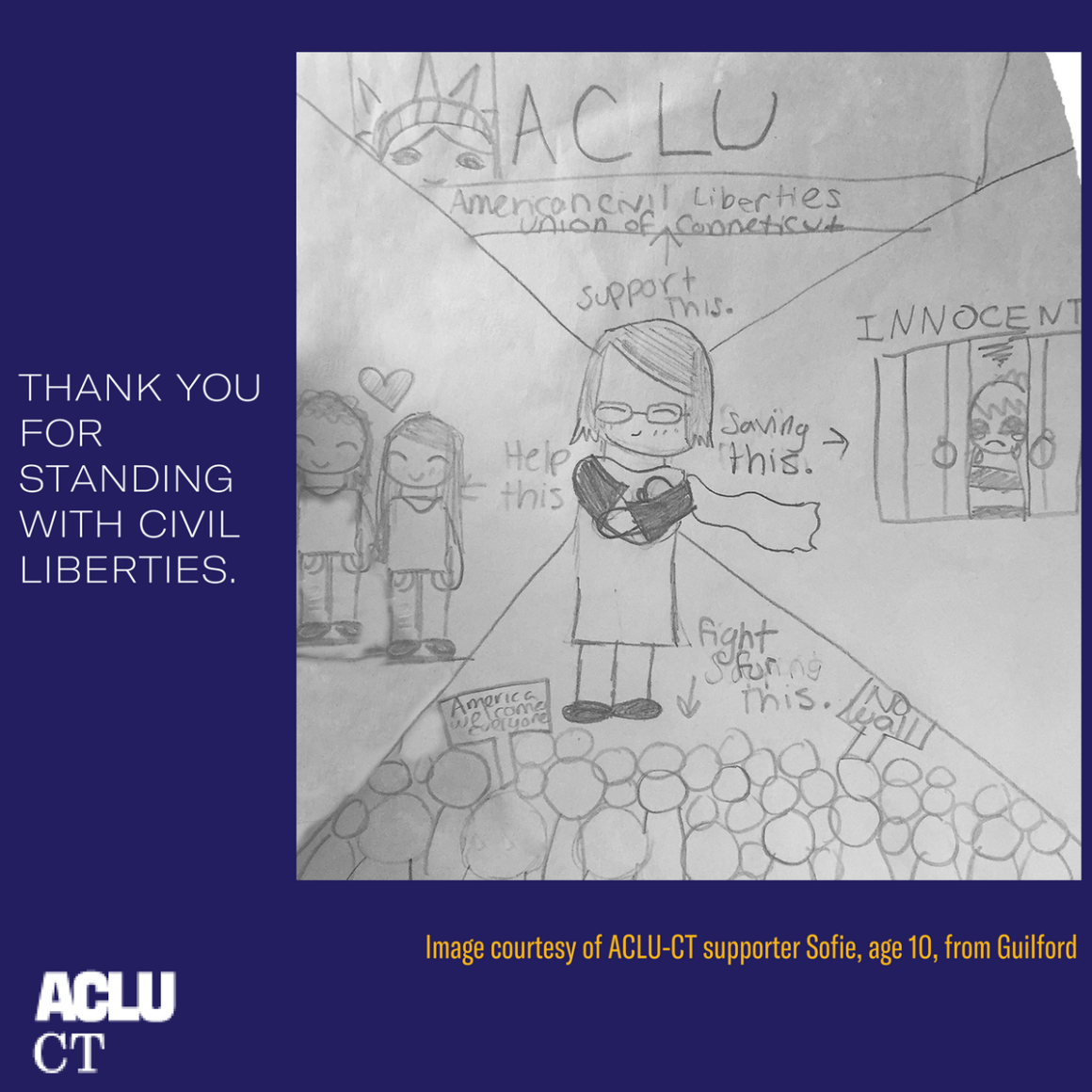 Statement Regarding Police Presence at Protests in Waterbury,...

Statement Regarding Police Presence at Protests in Bridgeport

Statement Regarding Fourth Deadly Shooting by Police in Connecticut...

Statement Regarding State’s Attorney’s Decision Not to Pursue Case...

ACLU of Connecticut Urges State Officials to Use Existing Powers to...