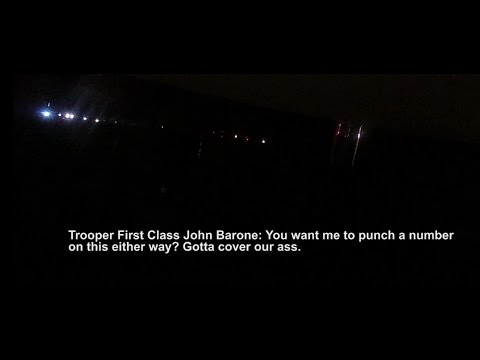 In a complaint filed with the U.S. District Court for the District of Connecticut, the ACLU-CT contends that three state police troopers illegally retaliated against and interfered with a protester by searching and detaining him, confiscating his camera, and charging him with fabricated criminal infractions. On September 11, 2015, Michael Picard was protesting near a police DUI checkpoint in West Hartford when John Barone, a state police trooper, approached him under the pretext of public complaints and confiscated his legally-carried pistol and pistol permit. Barone then claimed that filming the police is illegal and took Picard's camera. Unbeknownst to Barone, the camera was still on and recording when Barone brought it back to the police cruiser where his fellow state police troopers, Patrick Torneo and John Jacobi, were waiting. With the camera rolling, the officers proceeded to: call a Hartford police officer to see if he or she had any "grudges" against Picard; open an investigation of him in the police database; and discuss a separate protest that he had organized at the state capitol. After Barone announced "we gotta cover our ass," either Torneo or Jacobi stated "let's give him something," and the three settled on fabricating two criminal infraction tickets that they issued to Picard. Torneo drove away with Picard's camera on top of his cruiser, upon which the camera fell onto the hood of the car, Torneo stopped, and Jaboi returned the camera to Picard. In July 2016, the criminal charges against Picard were dismissed in Connecticut Superior Court. The ACLU-CT's lawsuit on Picard's behalf contends that the troopers violated Picard's First Amendment right to free speech and Fourth Amendment right against warrantless seizure of his property.

Complete video footage of the incident, as gathered by Picard’s camera while it was on top of Torneo’s cruiser and with closed captioning added, is available here [warning: this link will take you to YouTube, a third-party website].

In 2020, the lawsuit was settled. According to the settlement agreement, the State of Connecticut agreed to pay Picard approximately $1,800 for every minute that the defendants detained him (a total of $50,000), in exchange for his dismissing the lawsuit.

“In a free society, it is normal and necessary for people to protest the government, including police. If police violate people’s fundamental right to peacefully protest, those police employees should be held accountable. In addition to the human costs of poor police behavior, there can also be financial costs for taxpayers. I hope my story sends a message to police departments that they cannot ignore the constitution without consequences,” said Picard after the settlement.

Settlement Reached in Case of Cops Who Took Camera From Protester

Trial Ordered for Cops Who Took Camera Away from Protester

Get to Know the Candidates for Governor

CT Must Build Communities Where All Youth Can Succeed