If CT prisons and jails were a town, they’d have the highest COVID-19 infection rate in the state.

Imagine a town in Connecticut. Around 11,340 people live there, and about 6,000 more people travel in and out of it for work.

Among people who live in that town, as of April 20, 293 have tested positive for COVID-19, one resident has died, and the number of infections is growing very, very quickly: on April 1, only two residents had tested positive. People who live in the town suffer from disproportionately high rates of chronic illness. For example, the HIV rate is more than 3.5 times higher than the state’s as a whole. The town’s population is also aging, as 596 residents are 50 or older. Medical experts have stated that people who live in towns like this are at particularly high risk from COVID-19, as their “physiological age averages 10 to 15 years older than their chronological age.”

Town residents – who, again, are disproportionately medically vulnerable – are not allowed to physically distance themselves. Instead, many sleep in bunks a few feet apart. They share showers, phones, and other spaces. Once per week, some residents are given a bar of soap the size of a credit card to clean themselves; other people are banned from showering at all for 14 days. The luckier residents get two bottles of bleach to disinfect a room housing more than 100 people. The unluckier ones are left trying to clean their spaces with those tiny bars of soap. Hand sanitizer is banned. People are given masks that rip and that mildew in the wash. The town does not allow residents to create homemade masks and will not replace the provided masks when they get damaged.

Residents who protest these conditions are sent to the same place where the town is sending people who test positive for the virus. The town sends many, but not all, residents who test positive for COVID-19 to a place where the sewer system backs up, so the walls smell like human feces. The windows are mirrored to disorient residents, and some have described the place as “tomb-like.”

That place is not a hospital. In that place, people don’t have reliable access to medical care: the town only requires at least one APRN to be on call at a time, in a place where more than 100 people are sick.

After someone who tests positive is sent to that place, they are sent back to their original residence as soon as they have gone without a fever for 72 hours. They aren’t re-tested, and they are not quarantined or physically distanced from people after they return to their original area.

The town’s workers, who all travel in and out of town and go back to other places at the ends of their shifts, are in close quarters with people who live there, in buildings that aren’t clean, sometimes for 16 hours in one stretch. Some workers have non-medical grade masks, some don’t, and some won’t wear them. In one part of town, more than half of the 32 healthcare workers assigned to that area are quarantined with virus symptoms.

This horror story is not made up: this place is real, and it exists in Connecticut. The “town” is the Connecticut Department of Correction’s prisons and jails, its residents are incarcerated people, and its workers are DOC employees. All of the descriptions above are true numbers, details, and examples of what is happening right now in Connecticut DOC facilities.

Instead of taking actions to prevent the spread of COVID-19 in prisons and jails, the DOC’s response has kept people in danger and at times made it worse. The stories coming from people living and working in Connecticut prisons and jails are horrific. Governor Lamont and the DOC have been warned repeatedly by medical experts, incarcerated people, incarcerated people’s loved ones, and their own employees that the spread of COVID-19 in the DOC would be catastrophic if the state didn’t 1) compassionately release people to make social distancing possible AND 2) take immediate, hygiene, cleaning, medical, and personal protection equipment steps to protect any people who remained inside. So far, Lamont and the DOC have ignored those warnings, with Lamont even going so far as to mock people’s loved ones in the press.

The data is clear: for anyone trying to protect themselves from COVID-19, Connecticut’s prisons and jails are among the most dangerous places in the state. 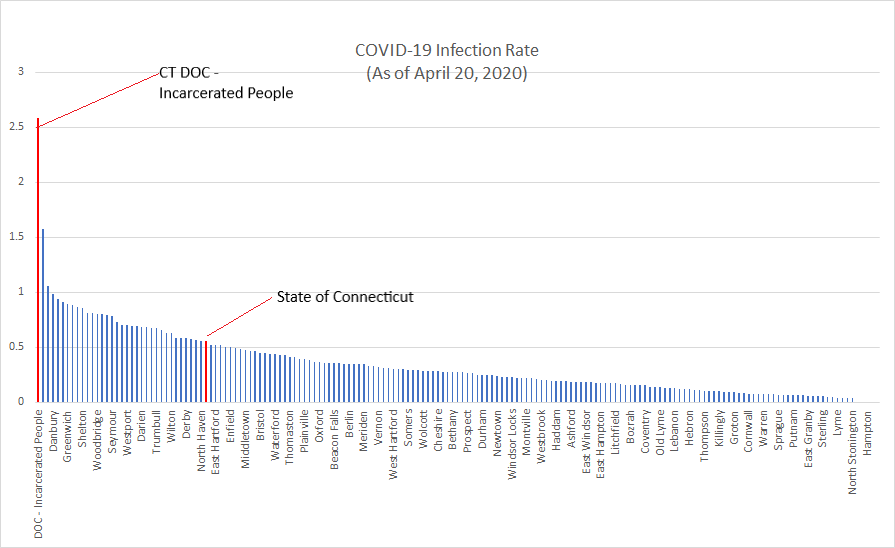 The numbers also show that in the DOC, the virus seems to be spreading rapidly. On April 8, Governor Lamont said the curve of infections statewide “seem[ed] to be flattening out.” But the curve wasn’t flattening for people in prisons and jails – it was rising, sharply. The day before Lamont made that statement, on April 7, 44 incarcerated people in the DOC had tested positive, only eight days after the DOC’s first reported case. By April 14, that number was 166. Three days later, it was 246. By April 20, it was 293. 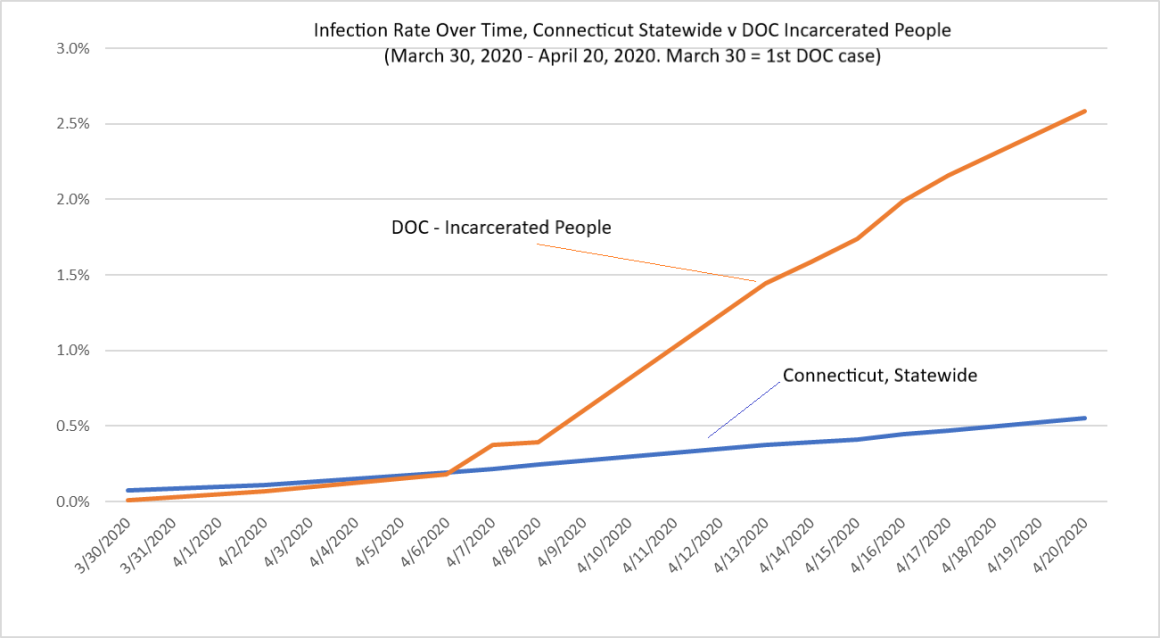 Cases among DOC workers are also rising. From April 3 to April 17, the number of DOC workers who had tested positive increased from 19 to 165. According to SEIU1199, the union representing DOC healthcare workers, more than half of the healthcare workers at Corrigan-Radgowski Correctional Institution were, as of April 17, quarantined with virus symptoms.

The numbers confirm what many families have feared: the DOC and Governor’s backward response is putting their loved ones who are incarcerated at risk. B.’s fiancé is incarcerated at Corrigan-Radgowski Correctional Institution. He has had two heart attacks in the past.

“There is no social distancing, not even a foot between him and the other inmates,” she said. “There were two people that had a fever and kept in the same room before they were moved two days later. Getting my fiancé out is so important, he is high risk and did not go in there to die.”

The consequences of the Governor and DOC’s refusal to stop the spread in prisons and jails is already taking a toll in human suffering and loss of life. On March 13, Carlos DeLeon, a man in his sixties, became the first person incarcerated by Connecticut to die from COVID-19 complications. DeLeon had an underlying respiratory condition and had been scheduled to be released, but the DOC denied his request to live with a family member.

We unfortunately don’t have to imagine a place where thousands of people are being left behind, locked out of the State of Connecticut’s attempts to stop the spread of COVID-19 – it’s here, in Connecticut’s prisons and jails, and the danger is growing by the day.

Even if Lamont and the DOC continue to ignore the people who they should have been listening to all along, they should pay attention to the numbers, which show that the DOC’s reactionary, backward-looking response is not working.

Connecticut Agencies Have a Lot of Independent Authority to Protect...