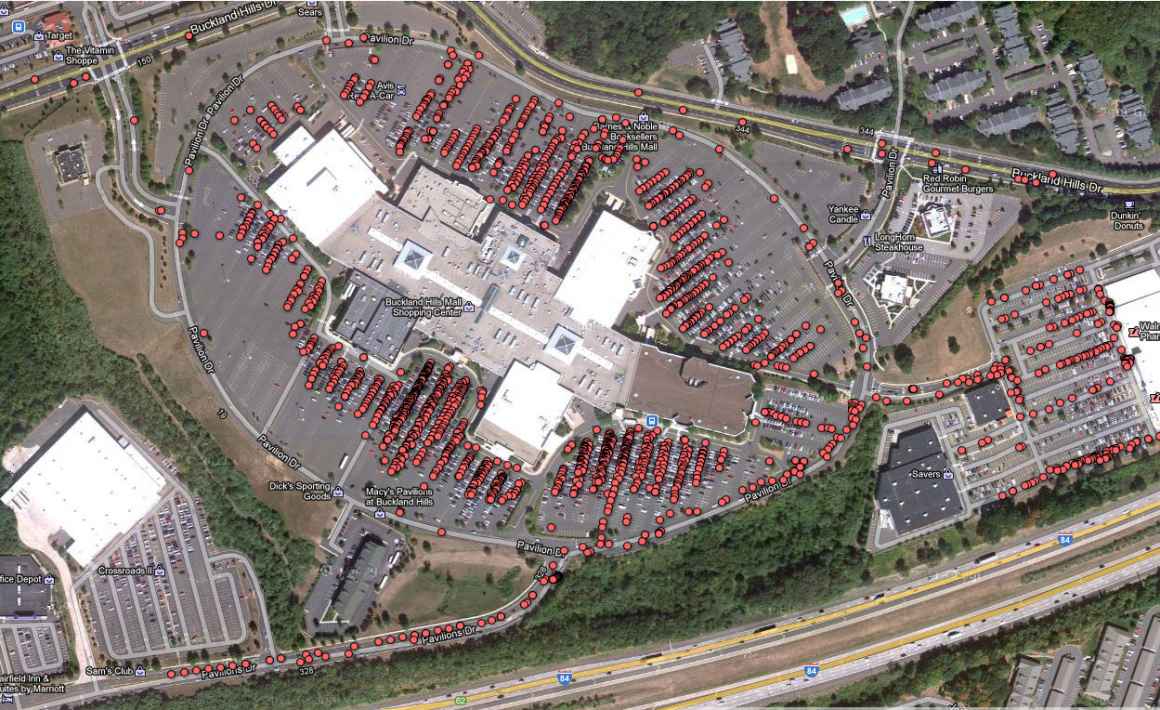 This Google Maps image shows the license plate scans taken at the Buckland Hills mall in Manchester during November 2011.

Cameras mounted on police cars have scanned millions of Connecticut license plates, collecting data that could track the movements of innocent people months or even years later.

That's not the main purpose of license plate scanners. They're legitimate and valuable law-enforcement tools that can identify the plate of an unregistered car at up to 80 mph, alerting an officer who can make an immediate stop.

But the data collected, including the precise location of every scanned vehicle, can also produce a vast, permanent database showing the whereabouts of people who aren't even suspected of doing anything wrong. And that's already starting to happen.

"When the data is archived, the potential for the invasion of personal privacy is very disturbing," said David McGuire, staff attorney for the ACLU of Connecticut. "And as more police departments adopt the technology and store the data, the threat grows."

Under a Freedom of Information request, the ACLU of Connecticut has obtained a set of 3.1 million scans accumulated by 10 police departments, most of them in central Connecticut. Using this data, the ACLU was able to map the locations of cars driven by its own staff around the area.

Another 15 towns in southwestern Connecticut are setting up a network to share scan data. In California, meanwhile, a private company has compiled 550 million scans.

The ACLU of Connecticut has proposed a simple solution: require that the data be discarded after two weeks, except when it's directly related to a criminal investigation.

"Dumping the data is a simple way to keep a legitimate law-enforcement tool from creating an unintended and frightening invasion of personal privacy," McGuire said."We can prevent the kind of retroactive surveillance that would reconstruct an individual's movements or scan a particular church, mosque, adult bookstore or motel just to see who dropped by."

S.B. 967, An Act Concerning the Recommendations of the Department...

S.B. 1085, An Act Concerning the Legalization of the Retail Sale...